Hemingway, at least, expected to be sad in the fall. In A Moveable Feast he wrote, “You expected to be sad in the fall. Part of you died each year when the leaves fell from the trees and their branches were bare against the wind and the cold, wintery light. But you knew there would always be the spring, as you knew the river would flow again after it was frozen. When the cold rains kept on and killed the spring, it was as though a young person died for no reason.” I have always found this passage to be very moving and I often quote it in various writings and even in conversation. If you live in a landscape of seasons, it’s evocative.

I find a solace in the fall that tends to buoy my spirit and find beauty even in branches “bare against the wind and cold, wintry light.” Part of the reason is that, growing up in the  Midwest, you punctuate your life by the colors and textures that each season brings. We Midwesterners well and truly understand Ecclesiastes 3:1-8, summarized succinctly in its opening line: “For everything there is a season, and a time for every purpose under heaven.”  I recall a time when I was teaching at the University of California in Davis. I had a comfortable office in venerable old North Hall with a view of a magnificent tree just outside my office window. The problem with that tree, I discovered, was that it remained the same year round. It might have been a painting hanging just outside my window. I was standing in my office one day looking at the never-changing tree when a student came in (my door was always open) and asked what I was doing. “Waiting for that tree to change color,” I replied, “so that I’ll know it’s fall (or winter, or spring, or summer) and I can be about my seasonal appropriate activities.”

For many years, the fall was a time of renewal for me. From age six to age 35, I was a creature of the academic life either as a student, a teacher, or both. When the leaves fell from the trees and nature began hunkering down, when the hounds of winter were on summer’s traces, I was renewing old acquaintances and forging new friendships. The fall semester of academic life was the budding spring of the academic year. It was invigorating, full of potential, providing a new start. A time to sow, a time to be born, a time to laugh, a time to dance. Heady time, the fall.

The first fall after I was out of law school at age 35, the fall of 1980, I hadn’t expected to be sad, but I was. The rhythm of academic life that had sustained me for so long was out of sync. Fall didn’t bring the energy of renewal as it had up to then. September, October: now they were just months of the year, sands in the hourglass of time, markers on the paths of glory that lead…Well, Gentle Reader, you know where the paths of glory lead I am sure.

This past week I was able to immerse myself in the glory of a northern Wisconsin fall. The colors had not quite peaked, but there were the aspen and white birch with their golden leaves shimmering along the Brule as I drove HW 13 from Superior to Bayfield and Washburn. The coniferous Tamaracks give a deep golden yellow glow as well. They will shed their needles in the late fall, the only evergreen tree in the state to do so.  The sumac were already a deep scarlet red even along HW 94 and 53 driving up north from my home in Windsor. The reddening of the sumac is always an early harbinger of fall.  Farther north, In Superior, the leaves of the red maples were meeting expectations by turning a brilliant red. 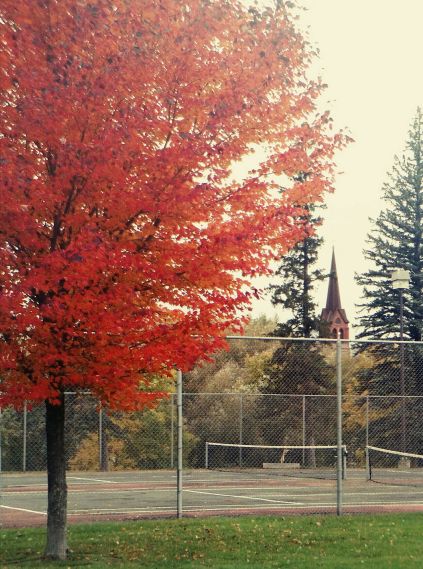 And then I was in Bayfield, my original home town, the place where part of my soul still resides. There’s a black maple tree in front of the old courthouse in Bayfield that I have taken a picture of for years and years. It was still there, still beautiful in its fall golden coat, and I took its picture once again.

The tree is about a block from my Johnson grandparents’s home. That site of blessed memory is no longer in the family, more’s the pity, but I feel its Siren call whenever I am in Bayfield. There’s an old barn on the property that is now on the National Registry of Historic Buildings. Cousin Mark Johnson and I spent many happy hours playing in that barn when we were wee lads in a time long ago, and, it sometimes seems, a faraway place. But when time and place seem to be slipping away from me, I always find my way back.

Sad in the fall? Hemingway maybe, but not me. Not me, not yet.

Leaving On a Jet Plane

The Big DayJuly 13, 2017
The big day is here. Shuffling off to Buffalo and then to Cambridge, England via London on July 16.