One of my favorite writers of non-fiction is John McPhee, a long-time contributor to The New Yorker and writer in residence at Princeton University in Princeton, New Jersey where McPhee was born in 1931 and lives there even now. Acolytes of McPhee are sometimes referred to as “McPhinos,” a somewhat unstylish term of endearment. And while I may not technically be an acolyte, I have, on my own consideration, read enough of McPhee to deserve the title of “McPhino.”

McPhee might be described as the “master of the mundane.” I say “master of the mundane” maybe even the drab because McPhee’s subject matter includes oranges, the pine barrens of New Jersey, geology and geologists, truck and train-driving, construction of river craft, Bill Bradley as a college basketball star, Alaska, and the North American shad among a variety of other topics. Most of these subjects were written as long pieces for The New Yorker and subsequently worked into books. If you have not read McPhee, you have a lot coming to you. I urge you to read this master of the mundane and I wish you joy of the reading.

Aside from the topics themselves, for me at least, McPhee’s genius is to tell his stories through, not only his keen powers of observation, but also through the eyes, ears, and attitudes of the people who are always part of what he’s writing about. This has perhaps been the long and winding road to talk about an experience that Dennis Ryan and I had yesterday when we went on our search for the grave of Ludwig Wittgenstein.

Wittgenstein is buried in the Ascension Parish Burial Ground about a 10 minute taxi ride from our lodgings at Sidney Sussex College. The cemetery itself deserves its own blog post and I may get to it. For now, I want to share our experience with you that is so McPhee-like.

You enter the cemetery grounds by turning off Huntington Road, a modern thoroughfare, onto All Souls Lane, an unpaved path wide enough for one car. If you go to the end of All Souls Lane, at No. 10 All Souls Lane, you will come to what was a small chapel but is now the site of American-born letter-cutter and stone-carver Eric Marland’s Alphabet Museum, a letter-cutting (read calligraphy) and stone carving workshop. 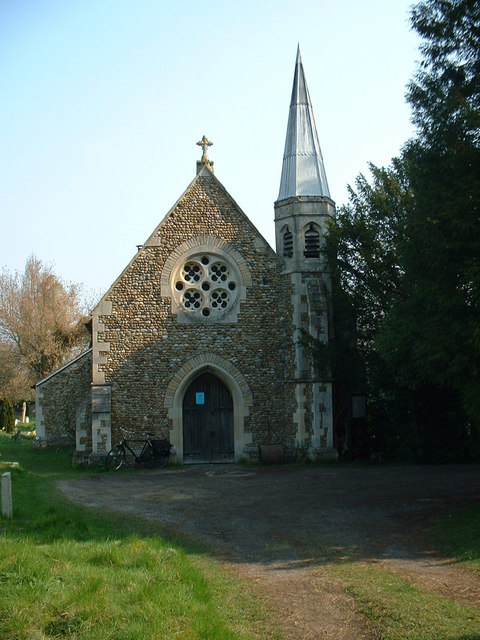 Marland is an almost direct descendant of Eric Gill, the famous (some would say infamous) British sculptor and print-maker who was part of the Arts and Crafts Movement that flourish in Europe and America from about 1880 to 1920. Gill died in 1940, so Marland, who is not yet 60, did not train with him. Marland did train with David Kindersly who was, perhaps, Gill’s most notable student. In keeping with the tradition, Marland now runs calligraphy and stone cutting workshops out of the Chapel at 10 All Souls Lane. We were happy to meet Greg Hanlon from Melbourne, Australia, who takes time off from his accounting job at an IT firm, to follow his own passion of letter-cutting and stone-carving and to receive tutelage from Marland. From master to master to master, the tradition lives on.

The Chapel at No. 10 All Souls Lane is a vaulted-ceiling, open spaced interior that Marland says is freezing cold in the winter and sometimes unbearably hot in the summer. He’s going to insulate it and put on a new roof, both expensive undertakings with no hope of financial help from the money-strapped Cambridge Council. But Marland is determined and I would not be surprised that were I to return to Cambridge a few years hence (that would surprise me), a good deal of headway would have been made. It’s clearly a work in progress. The interior space is furnished with long work tables, stone cutting gear, blank stones, stones carved with everything from obscure Latin to house numbers. One stone reads Vocatus Atque Non Vocatus Deus and is attributed to Erasmus but actually is one of the oracles of Delphi. A rough translation would be “Called for or not, God is present.” God should probably be god, and I think it might be more appropriately translated as “Be careful what you wish for.” Marland pulled out from under a table a framed original print of the alphabet designed by Eric Gill in Gill’s favorite sans serif font. Marland said, “We just found it going through some old stuff.” Gill had designed some of the carvings on the gravestones in the cemetery.

Eric Marland is a small, wiry, gregarious man. He wore a work brace on his left leg and walked with a slight limp. He and Greg removed a large, uncut stone block from the back of Eric’s van and, that job complete, Eric made use of some metal crutches to move around. Whether this condition is the result of his work activity or not, we did not ask.

Eric loves to share his knowledge and passion for his art with anyone who stumbles onto 10 All Souls Lane. He was born in Cambridge, MA but moved with his family, when he was very young, to Iowa where is father taught at the University of Iowa. Marland was not much taken with Iowa, to hear him talk, nor were his siblings. He and his brother left when each became 18. His sister left Iowa when she was 16. There’s a back story there, but the moment was not apropos to explore it. I couldn’t detect any Iowa accent, but he has picked up a Cambridge English twang. After our experience at the Champion of the Thames Pub the other day, I am a little leary about talking about accents. Let me say that Eric did not sound like Michael Caine.

I suppose we chatted with Eric and Greg for the better part of 45 minutes. It was more like we listened to Eric and that was perfectly all right. He’s a gossiper and had some stories which, true or not, were charmingly told. Marland is a sort-of docent of the grave sites though it is labor for which he is uncompensated. He was part of a refurbishing of  Wittgenstein’s grave marker which is a plain and simple ledger stone inscribed with Wittgenstein’s name and his years on this earth (1889-1951) cut in sans serif modern. Marland still keeps that site relatively free from the creeping vines and other undergrowth that have been allowed to grow wild in the cemetery.

People pop their heads into the Chapel mostly asking where Wittgenstein’s grave is and Eric is always ready to point it out. When we walked in he looked up from his work and asked if we were looking for Wittgenstein’s grave. “Already found it,” we said. “Lovely,” he retorted. We were looking for some other graves of people associated with Wittgenstein (George Moore, Frank Ramsey, Elizabeth Anscombe). We had found Anscombe’s but had walked by Moore’s and Ramsey’s graves. Eric was able to direct us to them.

I hope I’ve conveyed, “McPhino-like,” how wonderful our time with Eric Marland was. Marland is a craftsman of a different time I think. He’s ageless is maybe what I mean. I asked him “how many people say some variation of the “carved in stone” meme. I noted that I was not offering the cliche itself, only asking how many others did. He laughed and said that the notion of “carved in stone” was not all that accurate. Mistakes can be fixed. “Nothing,” Marland said, with what I thought was a twinkle in his eye, “is carved in stone.”

Leaving On a Jet Plane

The Big DayJuly 13, 2017
The big day is here. Shuffling off to Buffalo and then to Cambridge, England via London on July 16.